We have all ready the articles – hundreds of them –“Top Tips for a Successful Climb,” “Things your need to know to Climb Kilimanjaro,” “What to expect on Kilimanjaro.” They all speak about the altitude, the cold, the lack of oxygen, the need for fluids, how to dress and the tough summit night. What few speak about however is what makes this mountain so amazing and what most people forget about on their climb.

Climbing Mount Kilimanjaro pushes you to limits – we all know that. But how about, expanding your horizons.

Into the mist and rain… 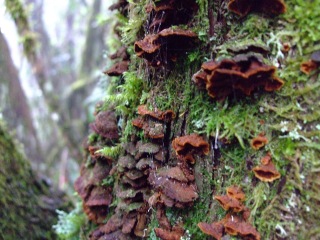 Yes, the first thing all the articles tell you about is the rain, the slushy paths, the need for gaiters and rain macs etc. But while you are making your way up the endless trails through the forest – look up. Up in the canopy you may spot a few black and white Colobus monkeys, the odd Owl or Silvery-cheeked hornbill on a perch. Look among the ground shrub for the small birds that dart to and fro. Stop and listen to the sounds of the forest, the insects, bird calls, and the sound of water running in the distance. Sometimes you may be lucky enough to see olive baboons and the odd mongoose and if you are on the Rongai route, look out for giraffe and buffalo as you leave the forest.

The plant life is spectacular. Endless strings of moss and lichen hang off trees and on the ground grow tiny red Impatiens Kilimanjari, along with violets and orchids. There are a myriad of ferns growing in old fig and juniper tree trunks.

Eventually the forest canopy will thin out and the trees will get smaller. Yes, smaller. Those same trees that you walked under in the forest will eventually become tiny shrubs until the heath zone shrubbery replaces them. The trees become more snarled and stunted as they are starved of the rainfall from the forest.

Giant heather bushes now sprout up towards the skies and wild grasses take up home on the rocky paths. Again, stop and listen to how the sound of the mountain has changed.

A faint breeze maybe, different bird calls that echo through the valleys. Among the stunning sections of flowering protea and red hot pokers watch out for the malachite and variable sunbirds.

Look amongst the rocks, especially as you near the alpine zone as here you will find the 4 striped field mice. Of course those near camp are not that small and have been known to raid the odd kitchen tent. The bird species start to change and now you will find what most people consider to be a large black crow. It is in fact a white-necked raven. You will find them kicking up a fuss in the trees around Shira and first caves, and hopping around like undertakers scavenging for food between the lava rocks.

Speaking of which, this is a dormant volcano. Take time to appreciate the amazing formations around you. Most people on Shira, Lemosho and Machame route pass by the Shira Plateau without ever looking back over it. It was once a crater which was filled in with lava during Kilimanjaro’s’ last eruption. Ask your guide to point it out to you.

Into the night
Yes, your nights at camp will be cold, very cold. There is no way to escape it. And yes if you are taking diamox you may find yourself having to run out for a bush break in the dead of night. But stop, look up. Yes up. Look up into the night sky as it is incredible. No city lights to block out the stars.

Your trek to the summit will be long but the rewards plentiful. And as the sun starts to rise, so do the crowned eagle and the rare lammergeyer. And if you miss them in the early light of day, you will certainly catch them swirling in the thermals above you on the way down.

This unique mountain is of the most sought after peaks in the world and certainly ticks a lot of boxes for its environmental diversity. It is an incredible adventure challenge and yes, it will challenge you. You pay a lot of money to get the privilege to climb this amazing mountain, so please, take time to enjoy everything that she has to offer.

Who knows, if you shift your focus you may just find that the day you thought was tough to start with, was actually most pleasurable after all.